Commonwealth computed the levels of electrical and magnetic fields and audible noise produced by National Grid’s Hudson 115 kV transmission lines in eastern New York. Calculations were made for both existing conditions and for anticipated conditions after a second circuit was added. The new double-circuit line was to comprise four segments, two of which would consist of two single-circuit structures side-by-side on the existing right-of-way and two of which would consist of double-circuit structures.

The nominal loading on the existing line varied by segment from 312 to 335 amps carried on a 795 ACSR (Condor) conductor with a nominal mid-span clearance of 22 feet. As a double-circuit line, the existing circuit was to be reduced to a loading of 142 to 166 amps depending on the segment location. The new conductor would carry 167 to 168 amps using the same conductor and clearance specifications.

Commonwealth performed the calculations using ENVIRO, a TLWorkstation program developed by the Electric Power Research Institute. For each of the four segments, Commonwealth calculated electric and magnetic fields and audible noise levels for operation at 115 kV and operation at a maximum voltage of 121 kV. For 115 kV operation, calculations were duplicated for six possible combinations of phasing to determine which produced the minimum levels of magnetic field at the edge of the right-of-way. 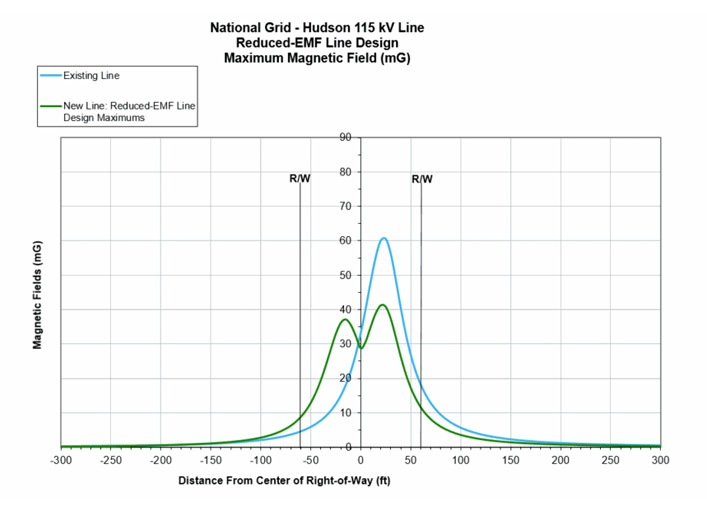